Do you write unit tests for your code? I hope so. Have you ever wondered how good your unit tests are? If so, what techniques did you use to check this?

There are several characteristics that good unit tests should have:

and the question is...

Take a look at the code snippet below:

This code contains a bug that makes the function return incorrect results. Let's write a test for our function:

Can you already see why test coverage is not always the best metric? Let's run our test with pytest-cov:

...but our test doesn't check anything. There's no single assert statement, it just calls the function. We have a bug, but none of our tests detected it. If only there was a way to prevent it ... 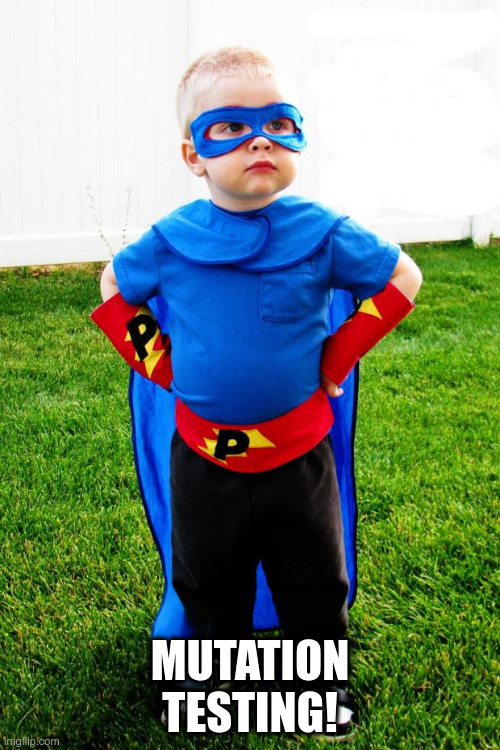 In this post, I will demonstrate how mutation testing works using the mutmut tool, but it is not the only option available (see also: MutPy, mutatest).

What mutmut does to your code? It makes subtle modifications that change the behavior of the code. Available mutations include:

Let's try it out on our previous example:

The output from the above command indicates that mutmut managed to perform 8 mutations of our short function. Two of them were detected by our tests and "killed," but six of them survived.

To see the details of the mutants that survived, we can take a look at the results summary:

The form of presentation is very developer-friendly, it looks like a diff view from git. We can see that mutmut has changed the value of a variable from 0 to 1. What can we do to detect this change? I would start with adding a proper assert statement to the test_fibonacci function:

Adding the correct assert will make our tests fail - remember the comment with the error note? :)

So let's fix the actual function:

But we've killed almost all of our mutants:

So let's check out what's left to be tested:

It turns out that for an even argument, it does not matter whether there is a + or - sign between the variables a and b. So let's add another assert, this time for an odd argument:

And run mutmut once again:

We did it! No mutant survived the meeting with our test suite.

You might have noticed that the number of mutants generated by mutmut varied over time. This is due to the fact that the test file was also mutated, and therefore, with the increase in the number of "mutable" lines of code (addition of == characters and numbers), the number of potential mutants to kill also increased.

To make more sense of the mutations, we can configure the package accordingly. The available options can be found under the mutmut run --help command, we can use all of them in the setup.cfg or pyproject.toml file. An example configuration in your pyproject.toml might look like this:

After a slight modification of the project structure:

we can stop using the --paths-to-mutate parameter in the mutmut run command call, and the number of mutants produced has decreased (the test file is no longer mutated).

The purpose of this post was to introduce the idea of mutation tests and to trigger a reflection on whether the tests you write are any good. The example shown here was written in Python, but other languages also have corresponding tools, such as Stryker (JavaScript) or Mutant (Ruby). If you have any questions about this post or would like to discuss mutation testing, feel free to contact me: lukasz.chojnacki [at] deployed.pl.

May good tests always protect you from bad changes!